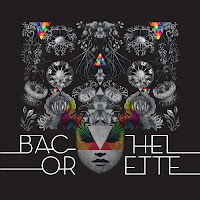 I’ve been giving Bachelorettes third, possibly posthumous, album a thrashing in the car. It’s simply called ‘Bachelorette’ – so there’s no excuse for forgetting the album name or need for scraps of paper. I’ve always been a big softy for psychedelic music and when you fuse with modern electronica you’ll nearly always have me on the hook. It’s Bachelorettes whimsical nature, all created in your average garden variety Kiwi house by a single lovable individual called Annabel Alpers, that makes her/their concoctions so tasty. Beautifully layered vocals,  spacey seventies sounding synths. Think Air stuck in a studio with Bjork working on the soundtrack for a re-make of 'Barbarella'. Annabel is the person humanity should pick to greet the extraterrestrial invaders, armed only with her keyboards. Her music is truly galactic. Please come back to earth Annabel, all is forgiven. Footnote: Can't help but think Annabel may well have been better to have saved the name of her first album and used it more appropriately here. It was called rather ironically 'The End of Things.'