Liam Finn recorded his 3rd and latest album in a Brooklyn studio overlooking the Manhattan skyline.
Finn junior has been residing the New York for four years now, but he hasn’t forgotten home.


Seriously man, how could he forget the free hand-outs available to musicians such as him via New Zealand On Air?


Indeed residency, or lack of it is seemingly no barrier to ex-pat musicians receiving the support of N.Z taxpayers.


But back to Liam who is clearly estranged from his old man, can’t make a similar call to the ones I get from my sons “You couldn’t lend me?”


Not only did Liam spend your/my money recording his album in New York he also shot the video for his publically funded single ‘Snug As Fuck’ there as well.


$12,000 of funding went offshore, no prob, no strings attached so we all get to feel goose-bumpy an Kiwi with a lofty musical surname thinks about us now and again as he mopes about his Manhattan apartment.


Does that mean I now have to now like Liam Finn?
Posted by Paul Goodsort at 18:17 No comments:

N.Z on Air pays for a video set in Australia!

It’s the beginning of 2012 and you are producing a video for local group AWA entitled ‘Papatuanuku’ which is Maori for Earth Mother.
You have N.Z on Air Funding and the underlying theme of the song can’t get much more authentically native New Zealand……
"Toitū he whenua, whatungarongaro he tangata" = Land is permanent, man disappears
So what do you do with your $6K of N.Z taxpayer funding?
You produce a video depicting scenes from The Queensland floods!
Don’t worry there was plenty of earthquake footage from Christchurch that would have conveyed the underlying theme of man’s frailties.
Like N.Z doesn’t suffer the odd flood or two, if its climate change you want to highlight.
But oh no just grab some helicopter footage from across the Tasman to fit the theme.
Ignore an abundance of similar public domain footage from N.Z.
Most people from overseas won’t tell the difference between Australia/ New Zealand anyway and besides N.Z on Air have no checks and balances, won’t give a rats if it’s Australia you are helping to promote.
It's not their money they are throwing about.
Posted by Paul Goodsort at 17:17 No comments:

Paco and Spidershark 3 at Tommy Chang's 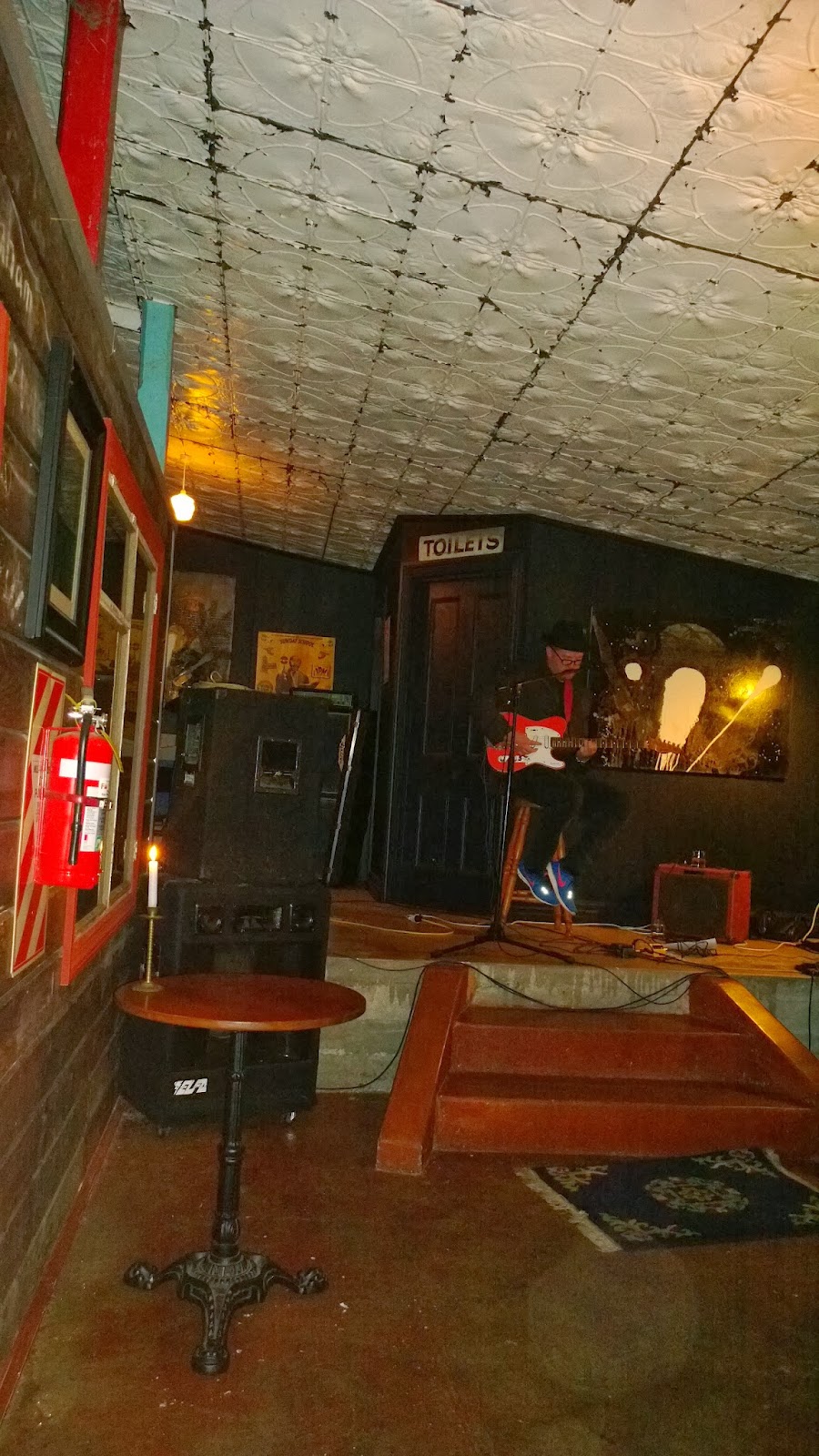 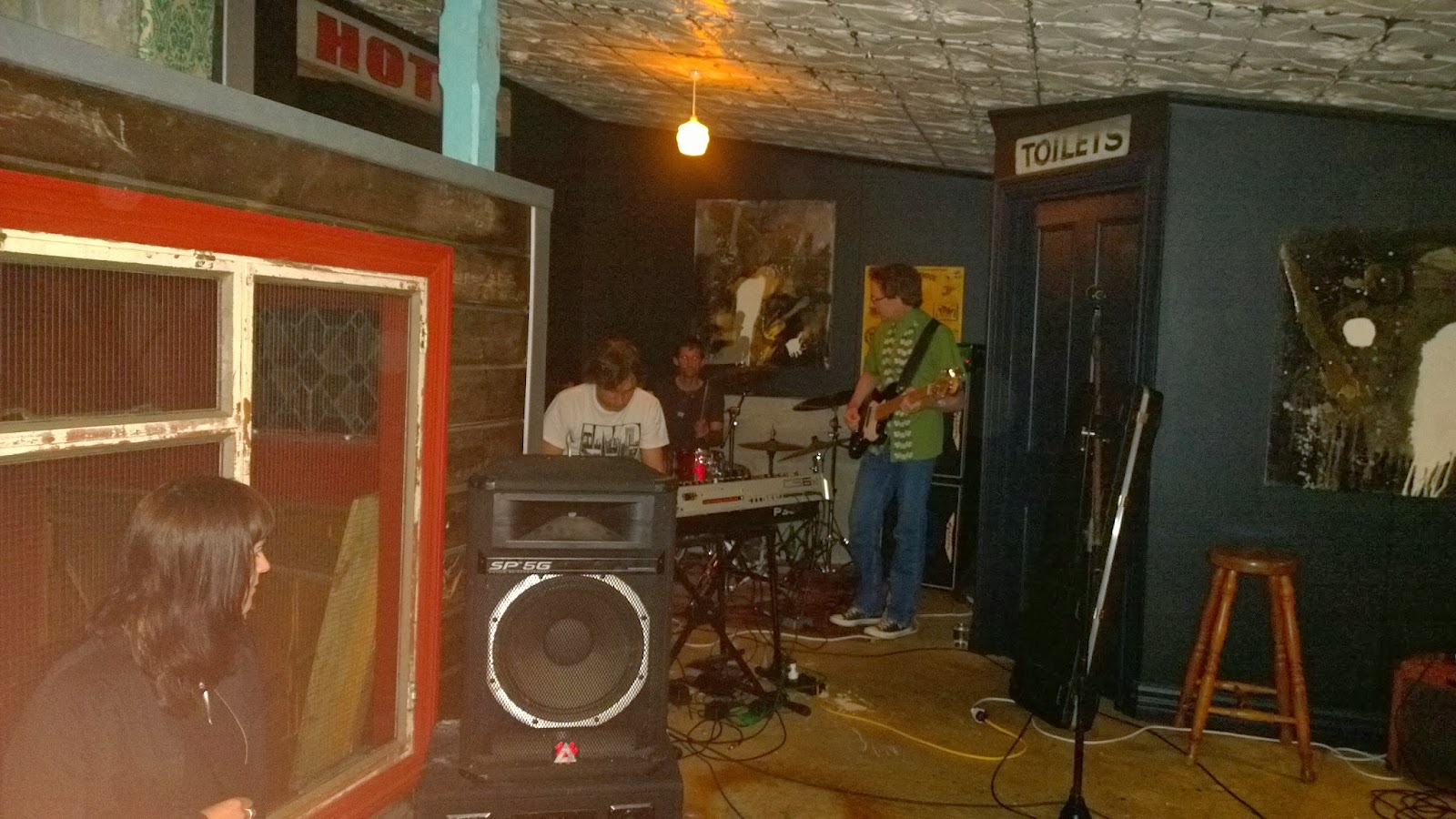 I have been over to Tommy Chang’s a few nights lately, including Saturday (15/2/2014).
Check out Lyttelton, cool eh? 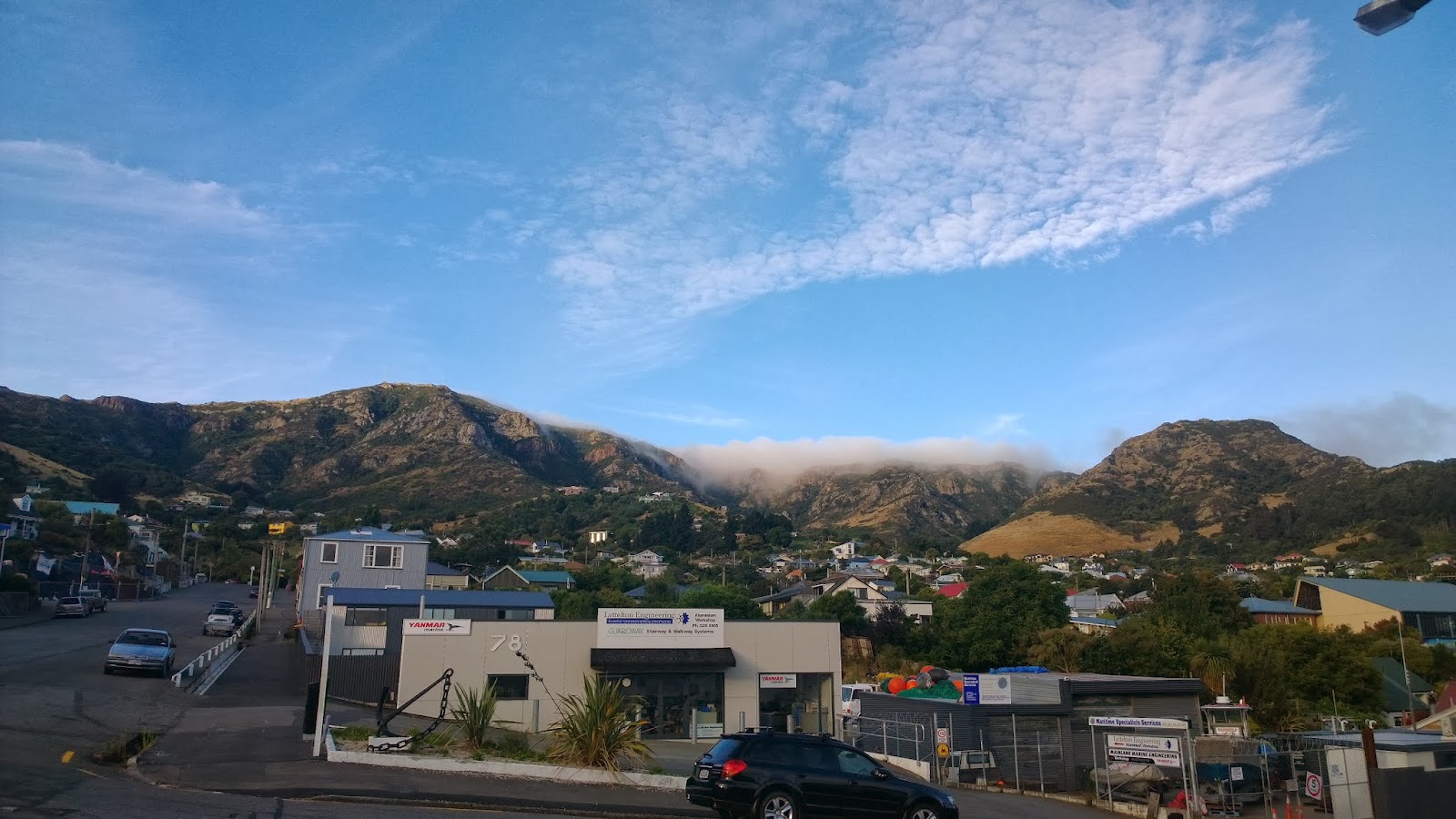 Don’t let the fact, catch the Christchurch malaise “it’s all the way in Lyttelton” prevent you popping through the tunnel.


In reality 30 minutes from say door Burnside to first beer on the table in Lyttelton isn’t a big chunk of any evening.


Lyttelton as a whole has a great, casual vibe to it.


It’s always been quirky destination but faced competition from the likes of poplar Lane (tears welt in eyes) prior to ‘The’ earthquake.


Lyttelton is rapidly filling that void of a place to go with something for everyone all in easy walking distance.


75 would fill it to capacity, but this just adds to the ambience.


The crowds are very eclectic, staff friendly and there’s a varied range of artists performing from old-school DJ’s to poetry readings.


It’s always been well worth the trip.
Oh yeah, I almost forgot to say I really enjoyed Spidershark 3.
Posted by Paul Goodsort at 13:00 No comments:

The Big Day Out Kills The Wellington Sevens 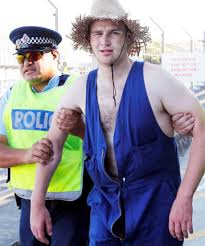 Wellington Sevens 2014: 270 removed from the Westpac Stadium for being too pissed or causing trouble, 20 arrests and the emergency department at Wellington Hospital left inundated with scores of injured drunks from the 27,000 attendees.

If anything, media bias you’d have thought the younger demographic at BDO should have produced more trouble.

The answer to this quandary is very simple….as an entertainment package 7’s rugby sucks!

It’s fucking boring, a stupid concept having some third tare players from non-rugby playing nations run about a full sized pitch made for twice the number, in a bunch of miss-match games held over a whole day.

Every time you look at a 7’s crowd on the telly there was gaping holes in the stands, accompanied by the dulcet hums of chattering females most of whom couldn’t even name you a single player, tell you who won the last game.

The only time the crowd ‘got into it’ was when New Zealand took the field and singing drunken renditions to Counting the Beat played over the stadiums PA in order to keep the crowd conscious, from making another trip to the bar.

Sevens’s is supposedly a sell-out weekend, yet seemingly no one wants to stay the whole time.
Forget what the NZRFU spin-doctors have to say - the on-field sport of 7’s fails to excite the crowd enough to keep their attention over a day.

It’s getting pissed first, getting dressed up second and remind me what is third again?
It's touch rugby, eh?

It’s a wonder more people at the Cake Tin didn’t get shit faced given the alternative was watching Portugal play USA or Kenya versus Scotland in a minority sport even the IRB has scant interest in.

Conversely BDO produced a world-class line-up (Pearl Jam, Hives, Mudhoney etc.) One that evidently appealed to virtually every ticket holder, enough to: avoid starting a fight, attempt to get onto the stage and remain lucid enough not to attract attention of security or the coppers.

Listening to the music is the priority for the BDO crowd, not dressing up like the Flintstones and Teletubbies, waiting to boo the English team as some sort of badge of Kiwi nationhood rather than a cringe-worthy embarrassment.

Music is #1 to BDO attendees so much so, that at the last concert in 2012 no-one was booted out of the stadium!

Meanwhile at the 7’s that year you had a fan out on the pitch head-high tackling a player in his undies. 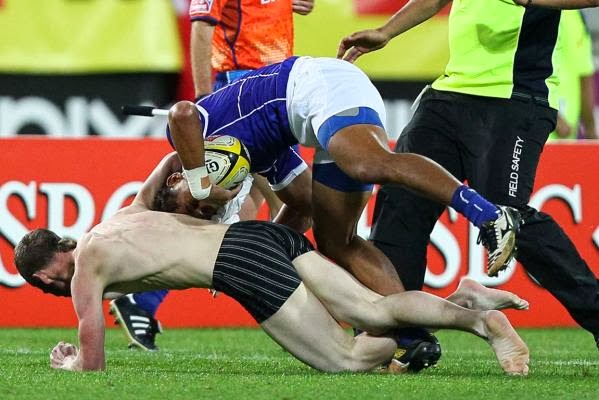 Probably the highlight of the tournament for most punters.

Rugby officials can only dream of having a crowd at the sevens just interested in rugby.

Still imagine if you banned fancy-dress and booze from the Wellington event.

How many die hearts would turn-up?

Less than a Phoenix game is my bet!


As an entertainment package clearly the Big Day Out kills The Wellington Sevens.

Up-Date after last weekend (15th and 16th Feb): 34,000 were at Queenstown’s Gibbston Estate for their Summer Tour Concert involving 10cc etc. Zero arrests and zero kick-outs. 55,000 went to Leagues inaugural ‘Nines’ tournament and we saw just four evictions and two arrests. If ever you wanted evidence that the game of sevens fails to keep a Kiwi crowds interest, most people go to Wellington to party and get pissed you have it ‘in spades’.

Posted by Paul Goodsort at 16:56 No comments:

Why the hell do we have a U.K based ex All Black on the board of a New Zealand Music Trust?


Let me start by first stating PIS does a great job in my books.


But hey here in New Zealand rugby is demi-god material.
One Sean Fitzpatrick is a bloody legend, rugby player extraordinaire, even if you've never heard of him being under 30.


And in New Zealand, as we all know, All Blacks are very important people, captains more so.


Get an All Black in undies and you’ll literally be propelled above the entire N.Z Winter Olympics Team when it comes to ‘sports’ coverage on our tellys.


Even AB’s that haven’t lived in New Zealand for over a decade, have an English wife and for all intents and purposes English daughters as well - they count for a lot.


But All Blacks in positions of power within N.Z Arts circles?


Surely they have the same credibility as an ex farmer judging abstract sculpture?


Take a deep breath: ex AB Sean Fitzpatrick is on the board of a trust that’s modus is to inspire Kiwi children to get into music.


No that’s no spello.


This is a music trust, not a rugby reunion committee.


Picture Sean on-stage at a school-time assembly suggesting to bug-eyed schoolboys at “You lads in the first fifteen should consider taking up cello, writing songs & not hurting yourselves in nasty contact sports.”


Issuing a media statement: “We should be having more Secondary School Scholarships for those children who want to play violin and not the front row.”


For starters he doesn’t live here.


You normally pay to hear him speak, on Rugby, not music, silly-billy.


I would doubt Sean Fitzpatrick has ever attended a PIS board-meeting, nor any of their awards evenings etc.

He is but a celebrity cardboard cut-out.


What qualifications, expertise can Sean Fitzpatrick possibly offer, that couldn’t be filled by a N.Z based Kiwi whose ‘heart’ is really into music?


Fitzpatrick’s inclusion on the board actually diminishes the PIS Trust’s credibility in the eyes of those into the N.Z music scene.


It smacks of ‘small townitis’ and ‘tokenism’.


It’s a joke.
A bad one for those that truly care about music in N.Z.