VOLUME MAGAZINE IS NO MORE 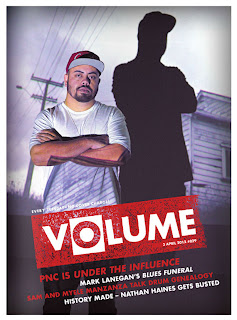 I’m gutted. I’ve just learnt that Volume Mag will soon be no longer. Issue number 33 will be the last. This was a worthy addition to the local musical scene, full of interesting stuff, reviews, eclectic shit. Of the 32 issues that came out I guess I got to scan say 20 and there wasn’t one I could point to and say I wasn’t edified in some way. Clearly it can’t have been making $’s for its masters, media moguls APN Group. ‘No money in it’ is probably overall the theme-song for N.Z Music as a whole. In its seven month existence head honco Sam Wicks and his team of writers did a splendid job and deserve our accolades. Let’s hope someone takes this ball and runs with it.
Posted by Paul Goodsort at 17:50 No comments:


Remind me again; are sedimentary sports of golf and bowls at The Olympics these-days? It pays to ask these things given the song chosen as N.Z’s Olympic theme-song (above) sounds like it was penned by someone living in their seventh decade and a closet fan of Harry Connick Jnr?


Let’s cut to the chase here – who the fuck can take a lyrics like "Through sweat blood and tears, you followed your dreams" seriously?


Say one of our athletes looking for motivation?


Kiwi fans looking for a hum-along pick me up?
On the motivation scale this croon ‘Stand Tall’ fails to register, is as inspirational as a headmaster telling the assembly to “pick-up your rubbish at lunchtime.”


Why not do a re-make of ‘Climb Every Mountain’ and be done with?


No I’ll go one better and suggest a re-make of Craig Scott’s Commonwealth games tune from 1974.
The song ‘Stand Tall’ was apparently penned by Sam RB who frequents Queen Street along with humanities flotsam and jetsam.


Unbeknown to you and me the streets of N.Z are a hotbed of busking talent and not just the haunt for some drunk doing a rendition of ‘Ten Guitars’ on ukulele.


Wellington’s Blanketman’s posthumous rap anthem “Gotta Dollar Ya C==t”?” must surely be in the pipeline?


But back to ‘Stand Tall’ and who the fuck decided this was a worthy song to fire-up the troops at the front and the masses at home supping coffee to stay awake in front of their telly’s?
You don’t need to be a T.V detective to follow the blood-trail on this one.


Scraping the surface like a sandfly it appears Sam’s benefactor, the man behind his meteoric rise to fame and a free trip to London on the tax-payer, was one Eddie Rayner.


You’ll remember him as the keyboard player from Split Enz.


That’s the same band the ‘Play it Strange’ chief executive Mike Chunn, the people who organised this song quest, played bass for.


Chunn is quoted as saying “Sam RB was a major talent who had achieved against the odds.”


With all these odds and strange’s getting bandied around here you’d be forgiven for being confused how ‘Stand Tall’ could have possibly been the best offering from the 300 entries received?


Sadly looking at The Finalists like ‘Rise Up Your Flag’ (video below) which Viagra have picked-up on – the answer appears to be resounding yes!
PS: I wonder if this guy has a good lawyer?